"What if fairy tales of our childhood would have happened in old Japan?"

That's the question put to a group of illustrators in Spain for a collaborative project in 2017, which makes for an interesting intercultural study of both fairy tales and Japanese folklore as seen and combined by outside peoples (both the stories, all of which shown here are referring to the German origin in the tales, even more than the American Disney lens, as well as Spanish interpretation of Japanese storytelling, culture, and folkloric characters).

There's definitely a subtext here showing how universal the tales of fairy tales are; that they are human stories, but we very much wish this project had included Japanese illustrators in the mix and had been expanded to Japanese writers, so they would write those stories rooted in their culture, as suggested by the illustrations.

We feel there's a lot that could be unpacked here, in both positive and negative terms, but for now, we are thrilled to see a different lens applied to well-known fairy tales, which helps everyone look at them differently, and reminds people that people all over the world are people and that these tales resonate, no matter what form they take.

It's not an approach without some risk though, For example, it is a little jarring to see a Japanese version of Cinderella as your brain figures out the multiple issues it just hit on. For one, most fairy tale fans these days are aware that one of the oldest variants found was from China (not Japan) and the illustration below isn't, perhaps, as clearly Japanese in style and design as it could be to distinguish this a different interpretation. To add further disruption, the character fondly considered to be the "Japanese Cinderella", Chūjō-hime, is depicted quite differently due to the fact that there is no "shoe" and "prince". Or perhaps that's just us being picky. Whatever the case, these are important conversations to have when considering other cultures, but it's also worth acknowledging that this doesn't make the idea of considering other settings (and how to represent that) as being invalid. The commonality is a love of fairy tales in "different clothes" and that can be very unifying. The important key here, though, is that a common love of something, while good, isn't enough. Using that commonality, however, to open the door to respectful and constructive conversations that aid proper representation can build bridges and bonds where nothing else could. (Yay for fairy tales!)

It's no secret that one of the big reasons we at Once Upon A Blog love fairy tales so much is that they show us how the human experience is the same all over the world while simultaneously showcasing just how widely variant the flavors of those experiences can be; they celebrate our shared experience as well as our cultural differences, and, as complicated as explaining those two things can be, fairy tales do it simply and clearly, and encourage an appreciation of people and peoples from every corner of the planet.

Continue scrolling down for some more lovely, interesting, and thought-provoking interpretations!

There are more illustrations we haven't included here, so be sure to go check out all the various artist's contributions on Behance HERE.

The illustrators involved in this project are:

All the individual portfolios can be found via this project page by scrolling to the bottom and seeing the list of "owners" for the project.

Are you pumped to read some Japanese "fairy" tales? We recommend the book "Once Upon A Time in Japan" by Japan Broadcasting Corporation (Nhk) (Author) Roger Pulvers (Translator) Juliet Carpenter (Translator), to get you started, though there are many beautiful individual-tale books and collections out there. [Please note this book has no relation to the project in this post!] Each Japanese tale (told in Japanese but translated to English) is illustrated by a Japanese artist, with an eye to representing their beloved tales and culture beautifully and magically for modern readers. (Amazon has a great preview showcasing the variety of illustrations used for different tales, which you can see HERE.) 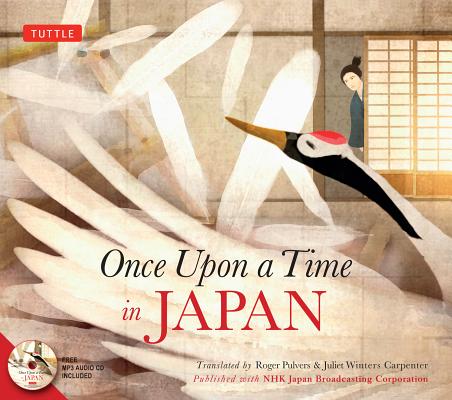 Here is the blurb and a list of the tales included:

When wily animals, everyday people and magical beings come together in a collection of Japanese fairy tales, wonderful things are bound to happen.

Each story is brilliantly illustrated by a different talented Japanese artist. The tales recounted here are among Japan's oldest and most beloved stories. Entertaining and filled with subtle folk wisdom, these retold stories have been shared countless times in Japanese homes and schools for generations. Like good stories from every time and place, they never grow old. Kids (and their parents ) will enjoy hearing these stories read aloud on the accompanying CD.

The fairy tales and classic stories in this collection include: