Need a smile? Do yourself a favor and listen to - and watch - this wonderful storytelling performance of 'Lubin, from Chelm' (a.k.a. the Eglish folktale 'Lazy Jack', relocated to the Ukrainian shtetl).

The English Symphony Orchestra (ESO) is in the middle of recording and airing a series called The Art of Storytelling and this is the second story of five planned for it. It's also become one of the best things we discovered this month!

We know it doesn't sound like it would grab you unless you're already regularly listening to orchestral programs - there's no pixie dust here to hook you - but believe us when we say this story is SO well presented and did we mention hilarious? These guys know what they're doing, no pixie dust needed. The series is called The ART of Storytelling for good reason.

(Think of an updated and somewhat edgier storytelling of the classic "symphonic fairy tale for children", Prokofiev's 'Peter and the Wolf', but with far fewer musical instrument detours and many more puns!)

Here's what ESO's The Art of Storytelling series is about:

ESO’s ‘Art of Storytelling’ project presents world premiere recordings and broadcasts of five exceptional works for narrator and orchestra. From the cheeky humour of the Brothers’ Grimm to the touching tale of Hans Christian Andersen’s Ugly Duckling, and from the Jewish humour of Lubin from Chelm to the ancient Egyptian tale of The Warrior Violinist, this is classic family entertainment for the modern age at its finest, a powerful synthesis of great literature and great music.

When we clicked on the link to take a half-interested look at this version described as "a Klezmer-styled re-telling of the classic English folk tale, 'Lazy Jack'," we expected to scan the site, maybe listen for thirty seconds, then get back to our to-do list. It took far less than that for the iconic Yiddish storytelling to hook us and we listened, smiled, and giggled more than a few times, for the full seventeen minutes! (Sorry to-do list - another time!) 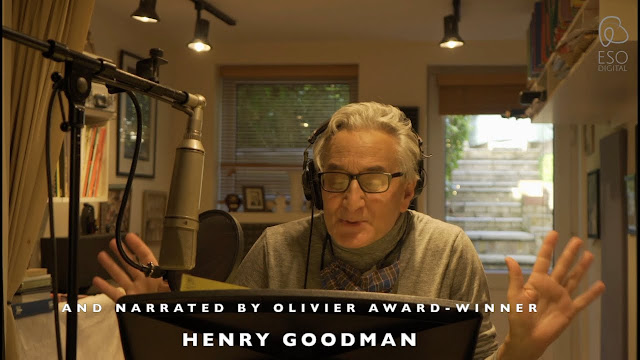 The presentation includes the narrator/storyteller, who in this case is Henry Goodman, the ESO playing a soundtrack throughout the story, and delightful little illustrations that, while simple as stand-alones, are wonderful in context.

Here's a trailer to give you a taste, though we must say we think the real opening of the story hooked us much better and wish we could just show you the first couple of minutes to hook you in the same manner we were:

As we mentioned, Lubin is actually the second story in the series. The first, currently available to view/listen to as well, is 'The Ugly Duckling', and is also wonderfully done, with actor Hugh Bonneville (Paddington, Muppets Most Wanted) as the perfect narrator. We managed to catch this when it was streaming (for free) on release day and didn't realize it would require being an ESO (English Symphony Orchestra) Digital supporter to view it at a later date, so we apologize for this, but having seen the program we completely believe it to be a most excellent way to spend a £5 monthly donation (yes you can "donate" from the US and other countries, and yes you can cancel anytime). A donation gives you access to all their other digital offerings too, not just The Art of Storytelling, so if you like beautiful music, beautifully conducted and played, it's a great bonus. We've jumped on board the ESO train, at least for the holiday season, so we don't miss any of this magic as well.

The next story in the series is from an Egyptian tale, titled 'The Warrior Violinist'. We're looking forward to it very much!

You can find ESO Digital's The Art of Storytelling series HERE and learn more about Lubin HERE.